I am, among other things, a rabid lover of berries and my walking companions can find it a little annoying when I’m suddenly distracted by a stand of one species or another.  Of course, I am not above picking all manner of fruit when they present themselves along a lane or pathway. This particularly refers to the fig trees in the neighbourhood and the yellow plum tree on the street nearby.  However, it’s really the berries that excite me above all.

I think about how hunter’s and fisherman have to wait and wait.  Perhaps it was different in the days when fish and some species of birds and animals were abundant.  The natives of the prairies probably had jokes about the guy who couldn’t hit a buffalo in a herd. (Perhaps that’s why in this incarnation I stick to berries!) In the meantime, we berry pickers revel in abundance…at least for now, i.e., as long as there are plenty of pollinators. Also, as compared to hunters and fisherman, there’s no mess, blood, bludgeoning, etc.  A ripe berry simply rolls into your hand and can be enjoyed instantly! 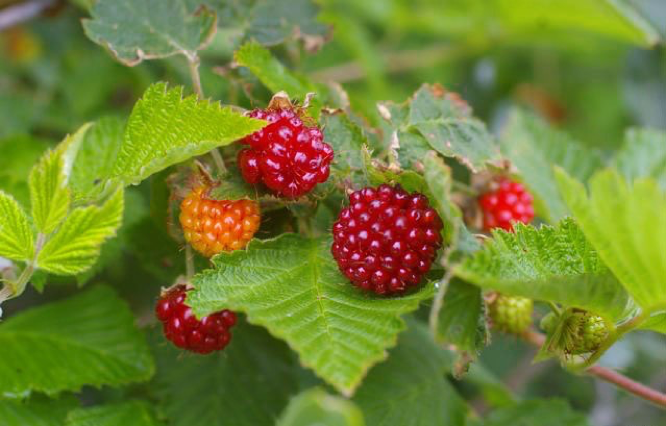 Berries have a remarkable nutritional profile and are often considered to be the most important and valuable fruits, with unique healthy aging benefits. Berries are a rich source of antioxidants that protect our cells from damaging free radicals. The very pigments that give berries their rich colour are powerful bioactive flavones with remarkable anti-aging and health promoting values. Generally, the deeper and richer the colour, the greater the nutritional character of the berry.

Some of the benefits of berries include their ability to protect from the harmful effects of high blood sugar while also improving insulin sensitivity. They are high in fibre and their seeds are rich in healthful oils. They have potent anti-inflammatory benefits, support arterial health, and can lower cholesterol. Berries also benefit the brain and moods, literally slowing brain aging.

Basically, berries are very important for anyone who is interested in healthy living and healthy aging. Research shows that extracts of dark berries cause aging rats to function like young rats again, swimming that moat and running that maze with vigour.

A word about powdered berry extracts. It is very important to source powdered berry products with great care, particularly capsulated, as according to studies very few of these actually contain any berry extractives at all.  Fresh or frozen is always preferable!

Here are the berries I fancy each year:

Rubus spectabilis - Salmon berries are the earliest berries, appearing in mid to later Spring to the early summer.  They are pleasant in flavour, sometimes quite sweet, and have the feeling of a welcome refreshment after the long winter months.  They are a berry that is not collected but enjoyed on the spot.

Rubus ursinus - The Pacific trailing blackberry, is a small berry that is prolific along the edges of forests and very tasty.  I’m fortunate to have several large patches more or less right behind my dwelling. I go out in the morning and pick them for my smoothie from when they appear in late June to mid-July.

Rubus parviflorus - The thimbleberry.  Small, delicate red berries that are bursting with sweetness and flavour.  They are very common along roadsides and trail heads. They are useless to gather in numbers as they are so delicate but fun and refreshing to enjoy on the spot.  July to mid-August.

Rubus occidentalis - The wild black raspberry.  I remember this berry from my early childhood in the forests of North Vancouver.  Rarer as compared to the others, yet they have a unique, fragrant flavour. I was thrilled to discover a few specimens behind my place though one was destroyed by someone cutting a trail and the other seems to have been overrun by other bushes and berries.

Rubus armeniacus - Himalayan Blackberry is the common species so prolific in Southwestern British Columbia.  Delicious and nutritious maximus! In my Vitamix those annoying and hard to digest seeds, rich in a variety of nutrient factors and healthy oils benefitting the skin and hair, completely disappear and that’s a good thing as otherwise they tend to get hung up between the teeth. The blackberry season is fairly short, lasting really only for a few weeks and I’ve just finished my picking for the year.

Amelanchier alnifolia - Saskatoon berries.  The plant can range from a shrub to a tall, broad tree and I have spots with examples of both.  The season is very short. There is generally only about a week when they can be picked before they whither and disappear.  They are very rich in flavour though they are quite seedy. They are very valuable nutritionally, superior to many other species. I like to pick a few freezer bags each year as additions to my smoothie.

Rubus laciniatus - Cutleaf blackberry. Rich in flavour, large in size, but larger seeds and a sharp back-hooked thorn that can be quite troublesome when picking.

Gaultheria shallon - A native species, Salal berry is very  common along trails, even used as a decorative shrub, but a pain to pick.  Not brilliant taste wise, but fun to grab while walking in the Northwest woods. The very dark navy berries are richer in the valuable anthocyanin flavonoids than blueberries.

Vaccinum corymbosum - Blueberry.  There are mountain blueberries that are common in the cascades of Washington and British Columbia but the cultivated varieties are an enormous industry in this region and it is relatively easy to find organic growers.  I pick about 70-80 pounds a year to feed my blender. Blueberries have rich nutritional values and are a tasty mid-summer treat.

Vaccinium parvifolium- Huckleberry. There are various species of huckleberries that can seem quite different.  The red huckleberry is a prolific forest bush throughout the Northwest coastal region and a common pit stop on a trail walk.  Just the other day, deep in a Vancouver Island valley, I found bushes with red berries as tiny as could be. The berries are generally fairly small, tart and pleasant but not a taste knock out. These are very different than the low growing and very blue and tasty mountain forest berries so prized in the Kootenay region that are, for some reason, also called huckleberries.

Health Considerations for Spring 2020
The Quality of Natural Products

More posts from author
Saturday, 01 August 2015 Gluten Free or Fact Free?
Thursday, 02 July 2015 The Benefits of Meditation
Monday, 09 June 2014 Skeptical of the Skeptics: Unreason in the name of Reason
ambassador