Taking a Sledgehammer to Heartburn

You may be surprised to learn that medicine is subject to prescribing fads. For example, I’ve been astonished at the dramatic increase of patients that are taking drugs that turn off the acid production in your stomach, a trend well evidenced in the medical literature.  These drugs are called “Proton Pump Inhibitors”. 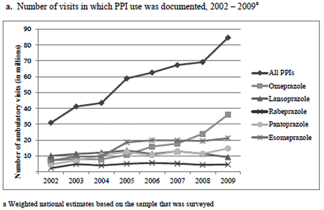 In fact, drugs with names such as Nexium, Tecta, Prilosec, Losec, Prevacid, Periot, are now prescribed for a wide range of stomach problems and related esophageal and throat symptoms, across a remarkable range of ages. I’ve seen several cases of children and teenagers on acid inhibiting medications. In fact, there has been an astonishing rise in the prescription of these medications for children under the age of one for gastric irritation and to prevent infant reflux. As of 2010, there were 114 million prescriptions of acid suppressing medications per year in the United States. Over the last ten years, the number of this trend has risen dramatically as you can see from the chart to 2009. I can guarantee that it is far higher today.

How did I Get Here

Now the question is this: what is heartburn? Specifically, heartburn is the common term for acid reflux, i.e., stomach acid rising into the esophagus. When this happens more than twice per week, it is diagnosed as GERDS or Gastroesophageal Reflux Disease.

Now, when I get heartburn it is a sure sign that I’ve eaten something that doesn’t agree.  If however, I didn’t listen to my body and go on eating foods that cause my stomach to rebel day after day, does it not seem likely that I would have ongoing digestive complaints and perhaps create considerable harm?

If I were someone who ate fast food for lunch on a regular basis - burger or fried chicken, maybe fries and a coke or a milkshake, what are the chances that I might get heartburn? Now if I were to add hurry to the quality of what I’ve been eating, or eating while anxious or angry, or while driving, talking on the phone, rushing to work, etc., the likelihood certainly increases that my body is going to react with indigestion and quite possibly heartburn. Let’s add coffee, candy bars, chips, etc.? How about simply the common diet of bread, meat and potatoes, add juice, milk, wine or beer? 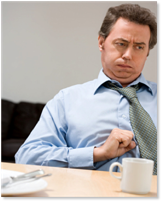 Let’s say I decide to go to the doctor and complain about my ongoing acid indigestion, quite likely due to some combination of the various behaviours listed above. The doctor listens to my symptoms and says, “You have GERDS and I’m going to prescribe Nexium for you.” Problem solved! I can continue to make absurd food choices with impunity because now I am armed with Nexium.!  In fact, the doctor very likely didn’t even ask or make any remarks regarding my diet!

One might wonder as to the role of acid in the stomach and the consequences of inhibiting its production with drugs. The major consequences will be mineral malabsorption and B12 deficiency, as well as an increased risk of gastric and intestinal infections.

There is also research suggesting a risk of cognitive decline! These same medications are associated with, increased osteoporosis, development of secondary hyperparathyroidism, increased bone loss and increased fractures likely due to the poor absorption of calcium.

Too Much Stomach Acid or Not Enough?

Can it really be possible that everyone with any kind of stomach or esophageal problem has excessive stomach acid? Did nature make a mistake by putting acid in our stomach? One might think so given the truly massive amount of PPI prescriptions. There must surely be those who suffer the very opposite, inadequate stomach acid production. Surprise! Research consistently shows large numbers of people over the age of forty-five produce inadequate levels of stomach acid and there is about a thirty percent drop in stimulated acid output in the over sixty-five category. In other words, it is far more likely that someone in middle age with chronic indigestion and heartburn is suffering from low stomach acid. Of course, relief for low stomach acid is inexpensive: a little apple cider vinegar in water, supplementing with hydrochloric acid tablets at meal time, or herbal digestive tonics that I compound in the office and find very helpful.  Another great stomach aid is chewable DGL tablets, a form of licorice that supports healing and protection of the mucosal lining of the stomach.

What we learn then is that the excessive prescribing of this class of drugs is an example of commercial interests and prescribing convenience rather than patient education and the chance for simple, natural supportive therapies. In most cases, dietary changes and the right natural medicines, along with exercise and stress reduction, would render a great majority of these prescriptions entirely unnecessary. This is a good example of treating a symptom as if it were a disease, creating a lot of unnecessary risk in the process, while whistling past the true problem that really doesn’t require drugs at all.